Strength - getting down to the bare bones 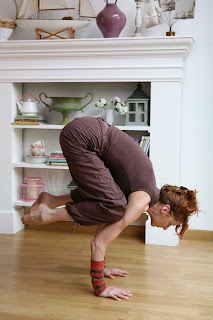 When discussing the merits of yoga what comes to mind is an increase in flexibility and concentration, sense of balance and interior calm, but rarely do you hear about the increase and importance of strength in yoga. Strength seems relegated to the supposedly sweaty depths of the weights room of a gym rather than the calming realms of the yoga studio. Which is a shame. Strength should and does play an integral part of yoga for many reasons; muscles are what keep the scaffolding of your bones in place, so it's worth keeping them strong. But apart from this, allowing your body to be put under physical pressure, to withstand weight does wonders for your skeleton - for your bones.

I've heard anecdotal evidence that one of the first human space trips ever undertaken had the russian astronaughts being carried out of the space ship - not due to some kind of hero's welcome but because their bone density had decreased to such an extent that walking may have caused bones to simply crumble and disintegrate. Although this is a nice story I've found little to back it up - but it does illustrate the concept nicely which is this;

Bones need weight (and pressure) to retain their density.

Weightless and Pressure-less atmosphere can be translated into “micro gravity” which is what astronaughts find themselves in up in space. The effects to the skeleton are devastating. Consider that here on earth we lose from between 1 – 2% of bone mass every ten years , whereas up in space that amount is lost every month. What does this mean? Well, it's bad news for those wanting to travel to Mars! the biggest obstacle to getting someone to the red planet is not financial nor technical but physiological; the bones of the astronaught would not withstand the journey. His or her skeleton would disintegrate before getting there.

So, for those of us back on earth what losing bone density adds up to is;

This is a bone-weakening disease that effects 75 million people through out Europe, USA and Japan. With age bones become so fragile that it takes a simple fall or knock to cause

a devastating fracture due to the decrease in mineral bone mass. 1 woman in 4 suffers from oseoporosis, but don't think men are exempt; 1 in 10 men suffer too. It's frightening to think that half of all women over 50 suffer from fractures due to this disease. Often called the “silent thief” , it surreptitiously does it's damage unseen and you don't actually realize until it's too late, until a bone has been broken.

Bones need stimulation and pressure to combat the loss in bone density. What happens when bones are not put under pressure? Basically they lose their ability to absorb nutrients. Technically it's a process called "bone resorption" which in layman's terms means that calcium is leaked from the bone into the blood stream. The bones without weight find themselves literally starved of the nutrients they need. However using weight and putting your body under physical pressure stimulates the vibrations of muscles against bones which in turn increases the bone absorption of nutrients fundamental to skeletal health.

If bones are not being "fed" and therefore "restored" they start to suffer.

I am not suggesting that all you need is yoga to combat oseperosis! What I am suggesting is that by carrying out and holding certain asana (yoga positions) one can stimulate bone growth. And the more you do that, the less fragile your bones will be, especially if combined with a calcium rich diet (be careful! fizzy

drinks block calcium absorption in bones, so if you take a calcium tablet with a swig of coke it's pretty pointless), exposure to sunlight (vitamin D) to name but a few. 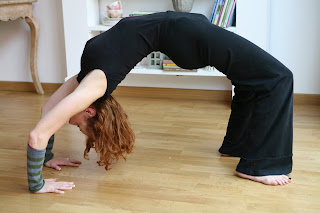 So this is good news for the weights room! And of course for those doing yoga - but only if one includes asana which work on strength in your practice, which is what I have found as an instructor, most women hate! What a shame considering it is women who benefit the most.

A little controversially in the yoga world perhaps, I am an advocate for weight training – this plus yoga is a great recipe for, amongst other things, healthy bones.

Another yogic food for thought as regards osteoporosis: the elderly who suffer the most from this disease break bones usually due to a fall of some kind. Why do they fall? Because they lose their balance. (seems obvious huh?) . If one does yoga regularly, including positions of balance in their daily (I'm a positive thinker) practice, there will be an improvement in ones sense of balance, meaning less risk of falling, which if you suffer from osteoporosis (and even if you don't) can only be a good thing. Even a the simple yet incredibly effective tree (vriksha-asana) position done regularly will increase your sense of balance. Try it.

The tree pose (balance rather than strength) 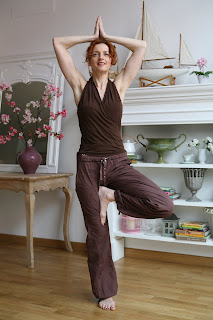