DEATH DO US PART. Part one 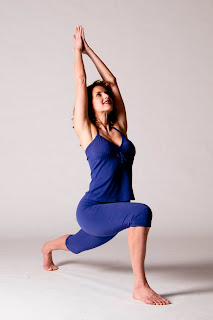 This week I wanted to take an in-depth look at the asana "Virabhadrasana". It's a position I had a very hard time with until recently and now it's become one of may favorites. I love it as it's a wonderful combination of real effort (and potency) together with poise and relaxation. I like the meaning behind virbhadrasana, it's all about death, destruction and chaos. It's powerful, it's loud and it's here.

The story goes that Virabhadra the warrior was born from the intense suffering of his father Lord Shiva. Having heard of murder of his wife (Sati) distraught , Shiva tore out his hair in grief and from one of his locks Virabhadra was born - to avenge the death of Sati. We have anger, hate, vengeance, violence, war, blood and tears. More or less what we go through everyday at the office :-) But how can this be? We are yogi's afterall are we not?! Where's all the peace and love and "ananda"?! What's going on?

I love talking about death in Italy. Even during the yoga class when death is talked about symbolically, indirectly people tend to wince as if you've just insulted their mother. Italians are a highly sensitive and superstitious race.

But never one to refrain from getting my hands dirty, I wish to stick my hands in the guts of things and get them muddy, so here it goes:

There is a lot to be said for death.

Firstly not wanting to die is no excuse for living mechanically. Because in so doing we are not living at all, but simply zig-zaging our way through obstacles that life throws at us, desperately trying to avoid them and getting hurt, instead of seeing obstacles for what they are - indicators of the present moment in time, an invitation to LIVE. Obstacles are like huge red arrows pointing to "HERE!!!!" like alarm bells inviting us to sit up and take note. They are invitations not only to here and now but to what that brings or uncovers; our birthright of underlying serenity, peace and joy.

Symbolically all this death and destruction is directed towards our ego - which I like to think of as our NON-PRESENCE. Whenever we are not present the voice in our head takes control, judging, ordering but above all sewing the seeds of suffering. Suffering and being totally present in time, are mutually exclusive. You cannot have one without the other. Good news huh?! The syllogism being that if you want to be free of suffering the answer is NOT to change the context in which you live so that everything and everyone does exactly what you want when you want it and as soon as possible, (apart from anything what a waste of precious ENERGY!) BUT simply to be THERE WITH what ever comes up. Breath with it. Breathe it in. Breathe it out. See what's under the surface. Try it.

So all this death and destruction, blood and tears can be used as a doorway to enter where the big red arrow is pointing: to access joy.

One of the 59 tibetan Buddhist maxims (or "slogans" as they are sometimes called but this word I dislike as to me, it congers up thoughts of washing powder adverts on T.V) is" What ever you meet unexpectedly, join in meditation" and "transform all mishaps into the path of bodhi" (this being "bodhisattva" meaning "awakening warrior" - so we have another Virabhadra here). I love these maxims as they sum up what happens to me every single day. Ie. that nothing ever goes to plan. This is NOT a lament but a statement of fact. That everything is an interruption to "How Things Ought To Be. Bloody Hell." These maxims however invite me to utilize these interruptions as a wake up call. Rather than fight the occurrences, and disturbances rather than attempt to morph them into something different or more pleasurable or simply pretend they are not there, I fight my REACTION to these occurrences/context. Death and destruction comes to the inner judge. This death rather than being something grandiose is slow meticulous and purposeful. I step inside the door marked "present" and decide to lead anger, dislike, anguish, hate to death through starvation. Through not feeding them, through not fanning the flames. Starve the reaction of input and enjoy what's underneath. And in letting myself go to the fact that I have no control (or very little) over what happens in my life, I can decide NOT to plug into the feeling of being offended, or angry or disappointed. I can chose to sit back observe and RELAX. I can ENJOY. I can LAUGH.

I'll give you an example.

Recently a woman came to try out one of my hatha yoga classes. She'd done yoga of a completely different sort for many years and decied to try something different. I invited her to try out my classes and that of my colleague and excellent hatha yoga instructor (Gianluca incase there was any doubt!). After the lesson we had a chat she thanked me for the trial lesson(s) and commented "But...you know this Hatha yoga stuff...it's kind of like a hybrid between gymnastics and REAL yoga".

It was a bit like being mentally hit by a lorry. Again for a nanosecond in a kind of Matrix moment everything was suspended, and I had the space to decide, to choose to be feed offense or immerse myself in the humor of it all. I chose the later.

(by the way I wish to underline that I do not believe she was WRONG - on the contrary. She had obviously really experienced and lived Hatha yoga in that way - who am I to tell her her interpretation was "Wrong"? Her experience was simply different to mine. Funnily enough I seem to remember that the first time I tried yoga that's what I had thought too - "this is just gymnastics with a twist!". Excuse the pun. So if any of my students out there feel the same as my unfortunately temporary guest, it's ok! Really!!).

My daughter requested that I lie beside her whilst she tried to fall asleep one evening. Feeling compliant I slipped in besides her and after a cuddle asked "Nina - do your love you mum?" To which she replied "Yes." "How much?" I asked "This much!" she said throwing her arms wide open. A moment of silence fell to be broken by her adding "But Mum...I've already told you this a HUNDRED times!!! That's enough now!" "Meeting" this comment "unexpectedly" gave rise to a moment when all time was suspended, suddenly my inner voice through suprise was temporarily "blocked" my ego underwent a death of sorts as I came face to face with HERE and NOW. I burst out laughing and eventually had to leave the room for fear of waking up my other daughter.

This sudden need to laugh which appears from nowhere is often under the surface. Have you ever experienced having a really bad row/arguement with someone or talking about something really serious and suddenly feeling the need to laugh? Or simply smile. Let it come! It's the underlying joy which we have bubbling up to the surface - ENJOY it - don't block it. Unexpectedly you've unveiled the present.