SNOW IN MILAN (and a peace of mind) 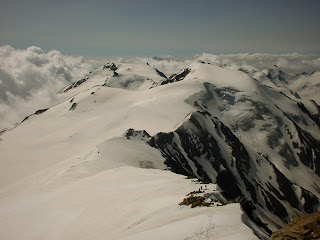 According to a Chinese proverb;

If you want to be happy for a day get drunk,

if you want to be happy for a week kill a pig,

if you want to be happy for a month get married

and if you want to be happy for life be a gardener.

Therefore I guess one way of being happy for a month AND a week would be by killing the pig: my husband. But lets not go into that. (actually I'm quite fond of him).

On a serious note. I'm not sure about the first three on the list but the last does seem to ring true. Pottering about the vegetable patch, knee high in mud and weeds and if lucky bean sprouts can be very medicinal even if not fruitful. However it's one of those wonderful pass-times that one simply does for the sake of it. Like dancing (the movement of the body without a final destination), singing (vibration of the voice without relaying information), painting (applying colour without redecoration) or meditation (sitting still without waiting for anything). Not everything has to have a final goal. In fact thinking about it perhaps the best things don't. Anyway - Unlike the first three, being a gardener and surrounded by nature as well as the medicinal side effect, has the ability of "lifting the mind into a state of clarity and gladness" : bringing it into a mediative state.

The contemplation of nature is a vedic (inner yoga) practice which I'd say just about anyone can attempt and be influenced by, nature is also has the advantage of being at everyones disposal. Much more "western-friendly" than the Vaishnava method (releasing the mind by idealizing someone you love be it guru, mother or god) and far more realistic than the Buddhist method (to make the mind content by feeling love and friendship towards all mankind), simply being with nature, taking in the sight of the mountains, a snow covered wood, watching the sea and waves, or looking up into a cloud dotted sky brings us away from our what suddenly seem petty problems, from mental "constriction" to a mental expansion which brings with it a sense of calm and peace. To such an extent and as such a potent "mind tool", that there is even a vedic term for contemplation of the sky: "akasha-bhavana".

For a year I lived on my own in an old farmhouse in the middle of a wood in Tuscany. There was no electricity, no running water, no telephone (before the days of mobile phones), no heating, and I had no car. Despite the material discomforts (washing my hair and freezing my scalp off in the stream outside the house),I had the opportunity of living nature to the full - I had my veggie patch (where nothing ever ended up on my plate because the deer and the wild-boar got to the veggies before I did) I chopped wood for the fire, I sat by the stream during spring and summer enjoying the smells and sights of my lush surroundings. Despite the material "hardship" I have to say it was bliss.

The good news is that one doesn't have to sell up and go off into a wood to contemplate nature or to experience such mental "gladness". One can be in the midsts of a city to do so. Just go to a park, or even less strenuous - just look up.

At the moment many are bemoaning the inconvenience of the snow in Milan. Although I too don't enjoy the delays and inconvenience of cycling through thick sludge, it is despite this, a wonderful opportunity. Instead of leaving Milan to come into contact with nature, nature has come to Milan. Sit back and watch. Enjoy. Contemplate the sky and watch the giant snowflakes fall, feel the mind expand and become peaceful.

* linguistic note for the Italians: in english "pig" when describing a person usually indicates someone slothful, lazy and/or a glutton.

Posted by Tess Privett at 4:02 PM No comments: