The Essential vs. the Important: ideas for the procrastinator 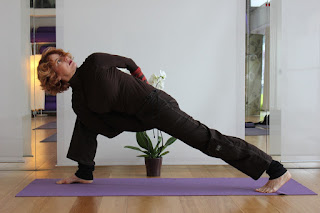 Here's a scene (luckily not a typical one) from one of my evenings at home with the family last week.

I flip. Ok I don't go ballistic  because I just don't…rarely anyway. But I did feel angry and I did let it be known. Snide comments did in fact ensue, followed by feelings of guilt afterwards (mine - I hasten to add).

In hind sight what I realized is that I wasn't actually (only) angry at hubby's total lack of concern for dinner uncooked,  nor the post-bomb explosion  aesthetic of the living room/kitchen, but I was mostly angry at myself. I had spent the entire day running around in headless-chicken-mode doing a 1000 important tasks and….I hadn't done anything essential. I felt frustrated and this caused a certain snapping of straws.

An ESSENTIAL task for me means one which has  long term impact either specifically or on life in general:
Physical (ex. running)
mental  (ex. meditation)
or in life in general  (ex. getting my book written and on the road to being published, yoga).

"Essential" means  something that promotes my well-being. Answering work emails,  getting lunch on the table for one daughter, a halloween costume for the other, although important are NOT  essential.
I feel crabby when I leave out the essentials. And worse, I don't feel wildly satisfied when I get the important things done either - at best I feel relieved. And usually exhausted.

When I leave out the essentials I don't get violent,  I don't get a nervous tic, I don't go for the drinks cabinet  but I do get unbearable and impatient. Towards myself first and foremost. This,  as an aspiring yogi,  is annoying: I don't mind having difficult emotions, I do mind a lot when they dictate my behavior.

According to Shoma Morita a Japanese psychiatrist (a contemporary of Freud) ,  nervous anxiety disorders  (and here I would add "anger") cannot be successfully "dominated". He started a mental health movement called "Morita therapy" which is based on the curative, medicinal power of action. Focusing on what needs to be done, and doing so  to the best of our ability he found,  was far more effective in alleviating mental and physical symptoms of inward stress.

Patricia Ryan of "Improv. wisdom" in her wonderful book on maxims for improvisation actors (and I believe that as yogis we are improv actors of a sort, not on the stage but in life itself) suggests that before  the show begins behind the scenes  "there are no huddles in the back room. Motivation is not required. Good intentions, beliefs, resolutions, even promises don't matter. Action does."

And the same goes for us yogis. Forget the ethical pros and cons, the whys and the why nots,   remember the essential - and get on with it.

How do we get things done when the procrastinator  in us raises its ugly head? ? Well, here's a few things I try to put into practice:

- I  filter my "to-do-list " for my essentials
- I figure out of those which is most  important for me and my well-being.
- I do at least one of the filtered items FIRST THING. For me that means getting up at 06.30.
- Routine is also a great help. I set out the objects  I need for my task the day before,  if possible for example:  lay out my running clothes, get out my meditation cushion, find my writing "bibles" my Pilot Shaker pencil and note books so everything is ready for action.  It works (usually).
- I sometimes  write a vague list/mind-map of the things I hope to get done the day before  - this is always a great help, but I confess I often forget to do it.

There is a mudra which focuses too on the ability to take action, the "Just do it" of the Mudra world:  Vajra Mudra. Great if you are feeling sloth-like, if you lack concentration and motivation. Gertrud Hirischi suggests doing it for 5 minutes three times a day. 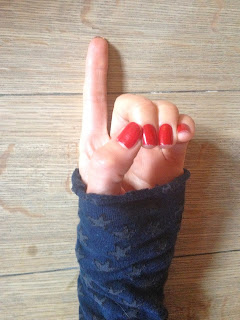 Press thumb against the side of the index finger

My hubby has another method. The "One-Two-Three, Big Breath - Go!"  Method. Hope to see it deployed a little more often in the kitchen department :-)